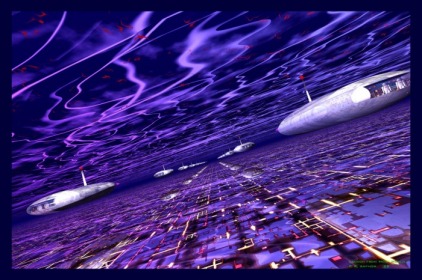 The smooth, dark grey exterior was disquieting in its monotony, except for the one jagged hole.  The obviously not-man-made feature was the only hint of vulnerability in the otherwise unbroken spherical perfection.  Whatever this thing’s plan had been, it was clearly spoiled with a high energy collision, most likely an asteroid or comet.

The lead scout shuttle plunged ahead into the blue glow emanating from the hole, followed by its identical wingman.  The inside of the giant sphere was vast, mechanical, and glowing.  A huge electrical firestorm filled the center of the interior, while the walls consisted of a pulsating pattern of lights that alternated between eight different configurations.  David, the lead pilot on the first scout shuttle, did a quick pass along a diameter across the center of the sphere interior.  He was confident that his wingman, Rumi, would follow without having to be told the exact plan, because David really didn’t have one, and was doing all this by feel, other than the guidance given by his pilot training.

But, now that he had reached the other side, it was time to explore more closely.  “Rumi,” David announced over comm, I’m going to bank right at the approaching wall and follow it, you bank left and go up.”

“Roger,” Rumi replied.  At the instant David broke to the right, Rumi broke left and banked up towards what they had agreed to refer to as the top of “Mech World”.  Rumi could see that David was hugging the inside wall, looking for features, openings, something that would give a clue as to what this was.  Rumi, therefore, cut more of a chord across the circle, passing through the electrical storm area, to give the two craft a bit more diversity in their second flight passes.

“Rumi,” David almost whispered, “do you see what I see?”

“The electrical storm is being modulated by your shuttle,” David explained.  Rumi looked up and could see that it was so.  He then looked down at his flight console.

The words, “We are ‘Mech World’ to which you refer,” appeared on Rumi’s console.  “The organic beings like yourselves who created us have perished.  We are at your service.  If this arrangement is acceptable, please ready the loading of repair instructions as we have experienced an unfortunate collision, as we are sure you already know.