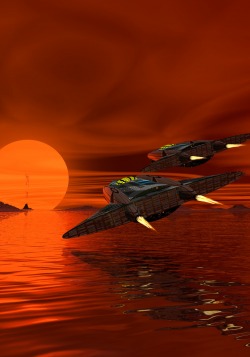 War, as in obvious, open armed conflict, was unknown in the solar system in 2045. But, there were claim jumpers and others who bent the rules, even when the results posed a threat to the well being of those around.
Ed had been eager to volunteer for this assignment, even though his wife, Anna, was pregnant with their first child, a girl. Ed had trained long and hard to be the best cruiser pilot on this large, watery moon, and this spy mission had to be done before the rebels could do any serious damage. "If not me, who, if not now, when?" he remembered from his military training, the quote variously attributed either to Rabbi Hillel or Mikhail Gorbachev. He had picked Percy Jones for his escort ship, because Percy was nearly as good a pilot has he was, but yet could be counted on to watch their backs while following his own often violent maneuvers.
The cruisers were not really stealthy, other than being small, so they came in low, wetting their wingtips with some of the wave splashes. If a wingtip actually caught a full wave, of course, the cruiser would be flipped around and destroyed, along with its occupants. Their only weapons were cameras. They needed to catch the rebels working on their launch facility during the interval between the satellite flyovers. These rebels were a clever bunch who not only timed their activities so that they were missed by all the satellites, but hid their heat signature under the frequent volcanic eruptions on a nearby island.

Ed and Percy’s cruisers went screaming over the island exactly as they had planned, catching the rebels so flat-footed they could neither hide what they were doing nor take any hostile action. The pictures they took would tell all, and the clandestine launcher would cease to be a threat to the rest of the community. The danger the cruisers experienced by their ultra-low flight was what prevented their detection and possible destruction. Ed and Percy rolled out over the large southern island and executed a slow barrel role in formation to make it obvious to the rebels that they had been detected. The colony had picked the right pilots for this job, and the result was sure to be another decade of peace and resource sharing. Trouble never ended for humans, even far out in space and in the future, but neither did the skill to deal with it. At least, this time…
science fiction art surreal space amthor